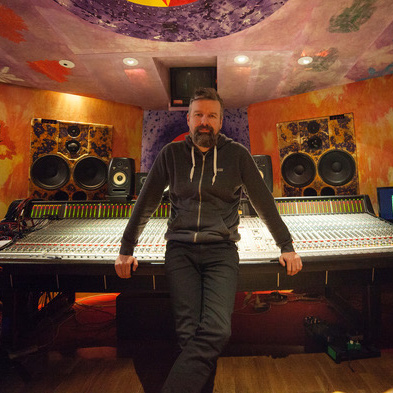 7pm Management Owner Seven Webster said “It was a natural progression for us to add James to our roster as he is someone we have worked closely with across three successful Top 40 albums for Skindred”. James produced the successful singles That’s My Jam which spent an impressive 4 months in the US Top 40 active rock chart last year and Big Tings as used in the trailer for Sky TVs critically acclaimed TV show Brassic.

Having cut his teeth while working at most of London’s most prestigious recording studios, Metropolis, Eden and Brittania Row working with acts that included the likes Dave Gahan (Depeche Mode), My Vitriol, Scott Walker, Bjork, Beverly Knight and Page and Plant to name but a few Loughrey has gone from strength to strength. It was his work with the aforementioned acts as well as with some of his exemplary work with more underground electronic artists like Flux Pavillion that first brought him to the attention of Skindred who were looking for someone that could push boundaries and break down barriers while also having the ability to rock the dancefloor. Over the last 10 years James LeRock Loughreys work with Skindred has attracted him to numerous artists including 7pm Management’s own artist Andy Taylor (Duran Duran/ The Power Station) who he has just finished mixing his excellent forthcoming Single Reaching out to you (BMG Records) a tune co-written by Ricky Warwick (Thin Lizzy/ Black Star Riders).

This website uses cookies to improve your experience while you navigate through the website. Out of these cookies, the cookies that are categorized as necessary are stored on your browser as they are essential for the working of basic functionalities of the website. We also use third-party cookies that help us analyze and understand how you use this website. These cookies will be stored in your browser only with your consent. You also have the option to opt-out of these cookies. But opting out of some of these cookies may have an effect on your browsing experience.
Necessary Always Enabled
Necessary cookies are absolutely essential for the website to function properly. This category only includes cookies that ensures basic functionalities and security features of the website. These cookies do not store any personal information.
Non-necessary
Any cookies that may not be particularly necessary for the website to function and is used specifically to collect user personal data via analytics, ads, other embedded contents are termed as non-necessary cookies. It is mandatory to procure user consent prior to running these cookies on your website.
SAVE & ACCEPT